True, but Hunter was 183cm x 76kg, he wasn't soft, size has little to do with it, Hunter was smaller(lighter) than Kade Simpson!

Yep. Sadly, the word is that the Pussycats were over-confident, thought they had it in the bag. Supported by playing a chubby Jack Steven (who gifted us a goal with a misdirected hand ball... among other stuff ups from him, a brilliant but sadly underdone player).

But that doesn't alter the fact that we came to play and took advantage of their lethargy / few % drop in focus which you cannot do against any side these days... well, maybe against the Crows you'd get away with it!

They almost got away with it. They were coming like an avalanche. I'm quite certain that with another 3 or 4 minutes they would have rolled us.
3
Interesting thoughts GTC - thanks for posting.
4
R9 votes : 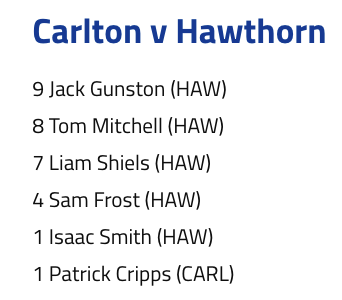 5
Given the craziness of this season, most predictions will come a cropper at some point. In some kind of biazrro way, we may win, but on paper, they should win by at least 6 goals. They just have quality on every line. Nic Nat in great form, Gaff, Shuey, Yeo, Kelly, etc - nothing more needs to be said. In terms of individual talent that has actually delivered (i.e not counting "potential" like GWS and the Suns) I would argue they have the most talented list in the comp.
6
Quote from: Lods on August 03, 2020, 12:28:04 PM

Can I add one other thing, in his presser, Teague stated something along the lines of "people are calling for a good start, I dont know if thats the best for us". I found that bizarre.

Every now and then I pop onto the Bomberblitz after their losses for a bit of light entertainment.

Looking at him, watching him, he probably thinks he is embarrassing his family at the moment, he looks depressed to me. He is panicked, and he punches the ground harder than he punches the ball or an opponent.

If not physical issues certainly mental, he needs a freshen up, something is not right.

Yes, I can see where you're coming from. mbb said he now looks like a B-grader, and he's probably right. One has to wonder what the problem is. Arguably the highest paid bloke at the club, co captain, most marketable player, seems to get his way on important issues (i.e Martin in, Bolton out). I'd like to make my next comment without starting yet another furore, but I've wondered for a while whether he is really captain / leader material. There's a part of me that really worries about whether he is more like Kouta/Whitnall etc. and less like Hodge. Just sayin'.
10
Quote from: LP on August 01, 2020, 11:14:42 AM

Cripps is broken, he needs a break or he won't be at our club much longer, and at the moment his trade worth is plummeting. So if we think he is going we might as well get him mentally fresh and whatever we can out of him before he leaves.

We highly uinlikely to beat Wet Toast over there anyway, so why flog a dead horse!

The difference is because the Holding the Ball implementation change last night, that enabled them to get their old structures back and working around stoppages and get some free numbers outside.

The bad Dawks ball using stats were because in previous weeks they were continually stuck in traffic under pressure.

It's certainly possible IMO. As you say, his whining earlier in the season was very specific and intended to produce a desirable result.
12
Quote from: LP on August 01, 2020, 10:50:05 AM

Personally, I fell it's been that way all season, I said as much in the pre-game thread. I think it was just a matter of time before a better ball using team exposed it, when we loose the football we look out of the contests. It's just that when we can maintain enough football it is a hidden defect, last night they dominated possession and once they got it outside we couldn't get it back.

One other thing I noted apart from the fumbling yesterday was the number of times there was a ball to be at ground level and our blokes stood around and watch each other only to have a Hawthorn player grab it and take it away. Thats weak IMO, scared for the contest.

Maybe worried about too many htb free kicks ?
14
One area that really sticks out is the uncontested game. When you see such a large discrepancy between the two teams, the first two things I think of are structure and work rate. if they're taking too many uncontested marks and the ball is moving forward, it's too easy to gain territory, and if we lose the ground ball uncontested, it's too many easy chains of possession to break away from congestion. That's where they really smashed us IMO. The contested game was a lot more even, although they were still slightly ahead. After 1/4 time, they were simply hungrier and prepared to work harder in my view.
15
Quote from: Gointocarlton on August 01, 2020, 07:37:45 AM

Such is the impact Carlton has on its fans nowaday, brilliant one minutes, shambolic the next. Chin up ol boy, the sun came up today as it will tomorrow, don't stress over it, there are way more important things in life than a game of footy.

Yes, I agree. The improvement over the last 12 months is obvious for all to see. Hawks have several 3x, 4x premiership players, some good traded players, and Clarkson. They weren't going to be rubbish forever, and sooner or later were bound to show something.